The symposium commemorating the 100th anniversary of the Russian Revolution brought new perspectives and research to the University of Illinois. One of the participants was Maple Razsa (Associate Professor of Global Studies, Colby College), whose new documentary The Maribor Uprisings opened new possibilities for participatory documentary experiences and audience participation. For those who attended, the documentary was an opportunity to think critically about the circumstances and individual choices made in a mass movement. Historically, the documentary traces a three-part uprising that occurred in Maribor, Slovenia in the winter of 2012. Maribor’s then mayor, Franc Kangler, had contracted a private corporation to install a stationary radar system which could remotely track and document speeding cars. In the first month, the system detected 25,000 offenses. Due to the private nature of the deal, over 90% of the earnings from this system went to the corporation, instead of the city of Maribor.

To watch the trailer, click on the image below or click here to be redirected to Maple Razsa’s Vimeo page.

The first two demonstrations were small gatherings around the mayor’s office. However, the third protest, fueled by the fear that the mayor may invoke an immunity clause in the coming election, swelled to over 30,000 people. This was an unprecedented event for Slovenia, which has traditionally been peaceful and with quite distant revolutionary traditions. In the spirit of the direct democracy that helped grow and spawn many uprisings globally, including the one in Maribor, Razsa invited us to also participate in direct democracy, collective decision making, and living with the decisions of the collective group. Razsa argued that the point of this documentary is not to receive an informative, traditional documentary experience, but to really attempt to empathize and feel what it is like to be in a mass movement.

The documentary quickly plunges the audience right into the heart of the Maribor uprisings. In the documentary, sirens, flashes and flares, smoke and crowded streets blur into one scene: protest. Crowds chant “Gotof je” (he’s finished”), directed at the Maribor mayor. A decade earlier, this slogan was used in neighboring Serbia to declare the end of the Milošević regime, signifying a deeper political statement about Slovenia’s corruption and recent Yugoslav past.

Individuals from within the documentary address the viewers directly, saying that viewers are “invited to join us as we record a new uprising, the third uprising, organized on Facebook and called for tonight. You will decide how you will participate.” The crowd swells around the camera, which focuses on a group of men pushing a hay bale. A narrative voice asks the audience: “will you follow this rowdy group with its bale of hay, headed towards city hall, or will you stay on Freedom Square, and interview those who have committed to nonviolence?” 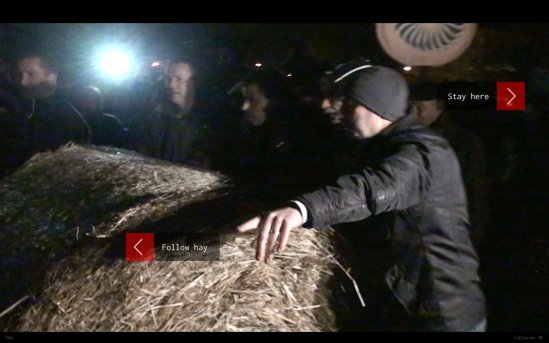 Maple Razsa interjected and mediated a vote of hands to choose where our group will go. By a close vote (17/14), the group voted to stay on the square. Rasza invited the ones who were outvoted to share why they chose to go with the hay bale. Those who chose to share expressed interest based on a viewer stand point, such as “wanting to see what happened.”

As the documentary went on, the audience became much more invested and connected to the experience on screen. Our group concentrated on questions that addressed larger issues addressed in the documentary, such as the assumed dichotomy between violence and nonviolent in mass movements. For example, our group chose to stay on Freedom Square for peace, but the crowd in the square ended up burning an effigy of the mayor, bringing up a question: is disengaging in physical confrontations the same as being nonviolent? Is burning an effigy of the mayor non-violent?

Soon after, the documentary began showing clashes with the police. As the police try to break up the crowd on Freedom Square, people scream and cough, while tear gas canisters can be heard shooting out of their cannons. Images of people pinned to the ground by police are followed by peaceful protestors sprayed in the face with pepper spray. After about 5 minutes, another question asks if the audience wants to stay with the protestors clashing with police, or to seek safety further away from the police line.

This question had a different reaction than the first, seemingly lighter hearted question. The majority of the group chose to stay with the protesters. Those who were outvoted were able to express reasons why they wanted to seek safety. The answers were much more personal this time. Instead of taking a viewer perspective, many of those who voted to leave the square did so out of personal experiences that led them to avoid confrontations such as these. Those who chose to stay did so because of solidarity with the protestors and trusting the police to reign in their brutality.

The documentary goes on throughout the night, following up with arrested protestors and their trials. Even though the documentary stops asking questions that were as heated as the former, the audience still could soon feel the effects of the choices that were made in the Maribor uprisings. In conclusion, the protests led to more than the audience had hoped: the Mayor not only stepped down, but the entire Slovenian government was upended due to rampant corruption.

The Maribor Uprisings led to many people, including myself, to see mass movements as something understandable and familiar. Many people discussed how the documentary allowed all of us to not only learn about the Maribor uprisings, but to feel connected to it. Maple Razsa stated that this was a main goal of the documentary; in a world where atrocities and absurdities from the news wash over us, it is easy to become numb to the circumstances, feelings, and outcomes of the people who are in uprisings all over the world. This documentary engages with global politics in an interactive and meaningful way that allows the audience to visually experience a mass movement.

Learn more about the film here.

Madeline Artibee is an MA student in REEES. She studies the former Yugoslavia, specifically Croatia and Serbia. Her research interests include consumerism, pop culture, and Yugo-nostalgia.

Become a Friend of REEEC